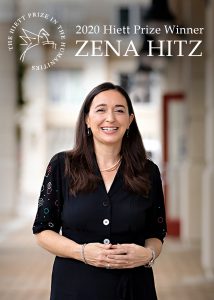 The Dallas Institute of Humanities and Culture is pleased to announce Professor Zena Hitz as recipient of its 16th annual Hiett Prize in the Humanities. Prof. Hitz is a Tutor at St. John’s College, where she teaches across the liberal arts. Her B.A. degree in philosophy is from St. John’s, and she earned a Master of Philosophy degree from Cambridge University and a Ph.D. degree from Princeton University.

The annual Hiett Prize recognizes dedication to and achievement in the humanities by candidates who are in the early stages of their careers and whose work shows extraordinary promise. It is the opposite of a lifetime achievement award and seeks to encourage future leaders in the humanities by applauding their early accomplishment and supporting their work through a cash award of $50,000.

Institute Executive Director Emeritus Dr. Larry Allums remarked that this recipient takes her place among past winners as “eminently worthy of the Prize. Zena Hitz exemplifies the kind of work, all too rare these days, that the humanities can foster. We need thinkers and doers of Zena’s talent and vision to regain the solid ground on which the humanities have in the past steadied our culture.”

The Hiett Prize was endowed by Kim Hiett Jordan, a Lifetime Board Member of the Dallas Institute, to honor her parents, who inspired in her a lifelong love of learning.

In an age when widespread emphasis is placed on formal education as the route to a profitable career, Prof. Hitz is engaged in defending the intellectual life—learning for its own sake, for its “splendid uselessness,” as she provocatively puts it, rather than in the service of economic or political goals.

Her book Lost in Thought, published by Princeton University Press, explores the meaning and value of such learning and has received enthusiastic responses from academic and non-academic readers alike. It is written for general readers and stands alongside her more scholarly work on Plato, Aristotle, and other seminal thinkers.

For the first time in its sixteen-year history, the 2020 Hiett Prize was presented during an on-line gala on Wednesday, November 11, that featured, in addition to Prof. Hitz, several past Hiett winners, including the 2019 recipient Dr. Jessica Hooten Wilson, who presented the award to this year’s winner.