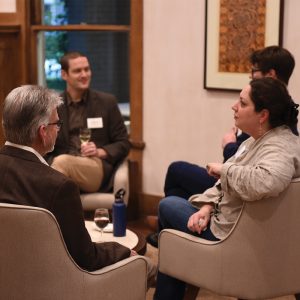 Civil discourse in the U.S. seems as endangered as any species in the wild, and the need is urgent and very real for sanctuaries in which both listening and speaking are honored. The Institute’s Friday Salon is one such sanctuary, inviting anyone in for genuine conversation—that quaint, old-fashioned activity—about topics that range from art to zombies, that is, anything touching our culture. Salon members are delighted to learn from each other in a generous exchange of knowledge and informed opinion–listening to, questioning, agreeing or disagreeing with our fellow interlocutors. As the 2nd century B.C. Roman poet Terence famously said, Homo sum, humani nihil a me alienum puto: “I am human; nothing human is alien to me.” If you want to experience again what is presently endangered, you should join us on the second Fridays of February and April.

DR. J. LARRY ALLUMS is Executive Director Emeritus of the Dallas Institute of Humanities and Culture. He earned his M.A. in Literature and his Ph.D. in Literature and Political Philosophy from the University of Dallas’ Institute of Philosophic Studies. He came to the Dallas Institute in 1998 from the University of Mobile, where he was Professor of English and Dean of the College of Arts and Sciences. He has edited a volume of essays on epic poetry, The Epic Cosmos, and published articles on ancient Greek and Roman literature, Dante, and writers of the American Southern renascence, including William Faulkner, Allen Tate, Robert Penn Warren, and Caroline Gordon. Under his leadership, the Dallas Institute continues to emphasize its commitment to urban issues and its longstanding work with pre-K through 12th grade elementary and secondary school teachers, principals, and superintendents.