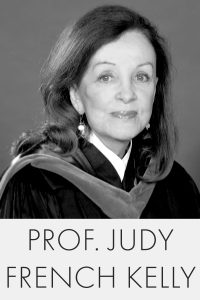 She has won special recognition for her cultural documentaries for PBS: her program Frozen Music: The Making of a Concert Hall, about I. M. Pei’s design and construction of the Meyerson Symphony Center, won an Emmy and a Matrix Award, and she was awarded a Texas Commission on the Arts grant for the production of Art Behind Bars about the art produced in American prisons, which also won a Bronze Apple Award from the National Educational Film & Video Association.

Judy Kelly has produced performance specials, The Dallas Observer Music Awards, for the local ABC-affiliate, WFAA-TV, as well as Impressions of Dallas, a multi-cultural community awareness documentary for which she led a collaboration between the Dallas Independent School District, the Dallas Museum of Art (which exhibited student photos), the Dallas Morning News and WFAA-TV. Her documentary on The Pegasus Project, produced for the Central Dallas Association, won Questar and Videographer Awards of Excellence. Her tribute videos for The Catholic Foundation’s annual Awards banquets have won Telly, Videographer and Communicators Awards. Kelly has created “The Spirit of Ceramics” series for NCECA (National Council on Education for the Ceramic Arts) which has been broadcast on local PBS stations in Massachusetts, North Carolina, South Carolina, Delaware, New Jersey, Pennsylvania, Texas and Indiana. For those programs, she has won Davey (Gold & Silver), Communicators, and Corporation for Public Broadcasting Awards.