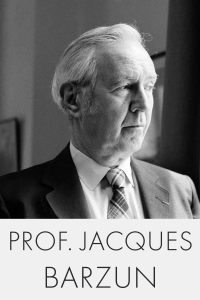 Jacques Barzun grew up in Paris and moved to the United States as a teenager. In more than half a century of service to Columbia and three decades since, Jacques Barzun has epitomized the potential of liberal education within the University and without. He distinguished himself not only as one of Columbia’s most outstanding professors and scholars, but also in a wide variety of delicate administrative positions. A prolific author for both the specialist and the general reader, he published as author or editor more than 30 critical and historical studies over the past eight decades, Barzun is perhaps best known to students for his The Modern Researcher, now in its sixth edition, and to teachers for The American University (1968). His surprise bestseller, From Dawn to Decadence, was published in 2000. In 2003, Barzun was awarded the Presidential Medal of Freedom, the country’s highest civilian award.

As a Columbia undergraduate, Barzun served as drama critic of the Spectator, editor of Varsity (the literary magazine), and president of the Philolexian Society. Immediately upon graduation, he was appointed an instructor in the history department. He became full professor in 1945, Seth Low Professor of History in 1960, and University Professor in 1967. He was one of the driving forces behind the creation of the Colloquium on Important Books. He later helped establish Humanities A and taught the course regularly. Barzun’s many administrative accomplishments include serving as dean of graduate faculties and as provost. Barzun’s commitment to the College never wavered. Even after retiring from the University in 1975, he has continued to defend the core curriculum and to speak out against declines in academic standards. As one former Columbia graduate student remarked, Jacques Barzun was known for “prestige, authority and self-confidence” and for “his unapologetic insistence upon excellence.”