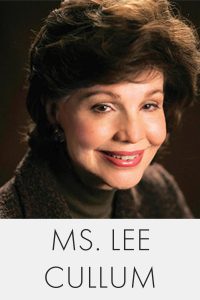 Lee Cullum is a journalist who contributes columns to the Dallas Morning Newsand commentaries to the National Public Radio station in North Texas. She also is host of CEO, a series of interviews with leaders from the world of business, produced by KERA.

Cullum has done regular commentary for the NewsHour with Jim Lehrer and National Public Radio’s All Things Considered. She was editor of the editorial page of the Dallas Times Herald and edited D Magazine, which during her tenure was a finalist for a National Magazine Award.

In addition, Cullum has done political analysis for the CBS affiliate in north Texas. She has hosted Conversations, a series of biographical interviews with major newsmakers for the PBS station in that area. She has appeared onNightline, CNN, MSNBC and on various television programs in Europe. She also has conducted seminars on journalism in Central and Eastern Europe and moderated panels for the World Economic Forum in Davos. She has spoken to press associations in Texas, Minnesota and New England; to committees on foreign relations in Houston, San Francisco, Phoenix, Dallas and Tulsa; and to the International Women’s Forum in Dallas.

Cullum worked as a reporter and then executive producer and on air moderator of Newsroom, a nightly program on the PBS affiliate in Dallas. She also developed several productions for broadcast on PBS including a profile of Lillian Hellman that was nominated for an Emmy.

Cullum anchored the Election Specials that won the Columbia DuPont Broadcast Journalism Award for KERA TV. She also has received honorary degrees from the Monterey Institute for International Studies and the University of Puget Sound, the Matrix Award from Women in Communications twice, as well as the Woman of Achievement Award from Southern Methodist University and the C.E. Shuford Award for Outstanding Journalist in Dallas Fort Worth. In addition, she was given the J.B. Marryatt Award by the Dallas Press Club.

Cullum serves on the board of Freedom House, the American Council on Germany, the Social Sciences Foundation benefitting the Josef Korbel School of International Studies at the University of Denver, and the Dallas Committee on Foreign Relations as well as the Board of Visitors of the International Programs Center of the University of Oklahoma and the Advisory Board of the World Affairs Council of Dallas-Fort Worth. Previously on the board of the Council on Foreign Relations for ten years, she is a member of CFR, the Trilateral Commission, the Inter American Dialogue, the National Committee on U.S.-China Relations, the Pacific Council on International Policy, the Texas Philosophical Society and the National Conference of Editorial Writers. She also is a senior fellow of the John G. Tower Center for Political Studies at Southern Methodist University and a fellow of the Dallas Institute for Humanities and Culture as well as the author of Genius Came Early: Creativity in the Twentieth Century. In addition she contributed a chapter toGrowing Up in Texas, A Texas Christmas and Literary Dallas.

Cullum attended Sweet Briar College and graduated from Southern Methodist University. She has one son, Cullum Clark, who is in finance and lives in Dallas with his wife, Nita, and their daughters, Lili, Annabel and Charlotte.