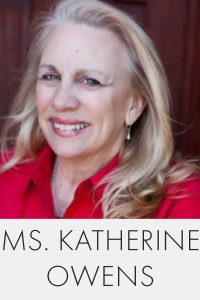 Artistic Director and founding member of Undermain Theatre, Katherine Owens is a native of Odessa, TX and graduate of the University of Texas. She is known for bringing new and visionary theater to Dallas audiences. She is a recipient of the AAUW Texas Woman of Distinction Award, the 2013 Dallas Historical Society Award for Excellence in the Creative Arts, was chosen as one of The Dallas 40 by DMagazine, was named one of Dallas’ 100 Creatives by the Dallas Observer, and was nominated for the 2013 “Texan of the Year” by the Dallas Morning News. She has been a fellow of the Sundance Institute since 2015 when she and Len Jenkin were selected to participate in The Sundance Institute’s Theater Lab to workshop the script of Len Jenkin’s Jonah which had its world premiere at Undermain in 2016.

Other world premieres directed by Katherine Owens at Undermain include Len Jenkin’s Abraham Zobell’s Home Movie, Time in Kafka and Port Twilight, David Rabe’s The Black Monk, Lynne Alvarez’s The Snow Queen, Mac Wellman’s Two September, A Murder of Crows, The Hyacinth Macaw, and Sylvan Oswald’s Profanity. Katherine directed Neil Young’s Greendale and John O’Keffe’s Glamour at the Ohio Theatre, Jeffrey M. Jones’ A Man’s Best Friend at WalkerSpace, and Lenora Champagne’s Coaticook at the SoHo Think Tank’s Ice Factory Festival. She has designed the videos for Erik Ehn’s Gold Into Mud (HERE American Living Room Festival in New York) and Swedish Tales of Woe (the Ohio Theatre). In 1995, Katherine traveled with Undermain Theatre to Macedonia, where she appeared in Goran Stafanovski’s Sarajevo, a threnody to the victims of the siege. She has directed numerous other productions in Dallas, New York, and Europe including the world premiere of Gordon Dahlquist’s Tomorrow Come Today, which went on to win the James Tait Award for Drama in 2015 and Judges 19: Black Lung Exhaling, which she directed as part of the international Belegrade Summer Festival in 2000. Over the next three years she will be directing Matthew Paul Olmo’s trilogy so go the ghosts of mexico.

Katherine has served as a juror for the Asian Film Festival of Dallas, has been a panelist for the Alpert Awards and Texas Commission on the Arts, and is a member of the Booker T. Washington High School for the Performing Arts Artistic Council. Her familiar voice can be heard narrating a number of programs for PBS and KERA 90.1 as well as several documentaries including Mark Birnbaum’s Las Mujeres de Valle and Judy Kelly’s Frozen Music, which won an Emmy and a Matrix Award. She is married to actor and musician Bruce DuBose.