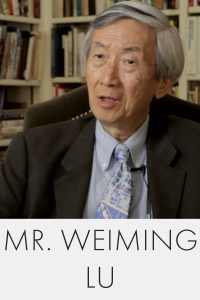 Weiming Lu, FAICP, Hon. AIA, is an internationally recognized urban planner and designer. Through public-private partnerships, he led the effort in transforming empty warehouses and parking lots in the historic Lowertown to a new urban village by the Mississippi, where many chose to live and work, including 500 artists. Soon the Union Depot will be restored, light rail transit, Amtrak, and high speed train to Chicago will follow. It became a national model for building livable, creative and sustainable cities.

His career took him to planning and design leadership positions in Minneapolis, Dallas, and St. Paul. In Minneapolis, he helped formulating the Constellation Cities Plan for the Twin Cities metropolitan area; and the Metro Center 85 Plan that led the rejuvenation of downtown Minneapolis. In Dallas, he led the urban design program, which helped save the Texas School Book Depository, and the rejuvenated the West End District, created the Art District, helped save Swiss Avenue, and protected the escarpment district and the flood plain.

He has lectured at many universities including Harvard, MIT, U.C./Berkley, Illinois, Wisconsin, Kansas, Texas, Rice, Ball State, Tsinghua, Nanjing, Warsaw, Wasada, and Seoul. He was an Adjunct Professor for the School of Architecture at the University of Minnesota, and the Southern Methodist University in Dallas, Texas. He served as advisor for the MIT East Asia Planning and Architecture Lab for a number of years. He was a Visiting Professor for Tokyo University, and the Chinese Culture University in Taiwan.

Currently, he is an advisor to the planning institutes of Beijing and Shanghai, the China National Academy of Arts, the Lower Phalen Steering Committee, the Greater Lowertown Master Plan Task Force, and the U.S./China Friendship Association on a Chinese Garden project. He and his wife have created a Shan Shui Foundation Fund in support of art and culture programs.