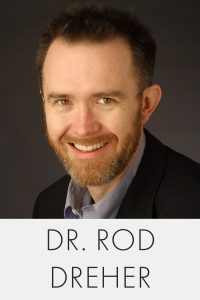 Mr. Rod Dreher is director of publications at the John Templeton Foundation, a philanthropy that focuses on science, religion, economics and morality. A journalist with over 20 years of experience, Dreher was a columnist, editorial writer and online editor at The Dallas Morning News. He is author of the 2006 nonfiction book Crunchy Cons, about neo-traditionalism on the cultural right. He has been chief film critic of the New York Post, a staff writer at National Reviewmagazine, and a contributor to the Wall Street Journal, NPR’s “All Things Considered,” CNN and other broadcast media. His areas of interest include conservative thought, religion, culture, philosophy and food. Dreher is a 2009 Templeton Cambridge Journalism Fellow in Science & Religion, and writes the popular Crunchy Con blog on Beliefnet.com. He lives in Dallas with his wife and three children.