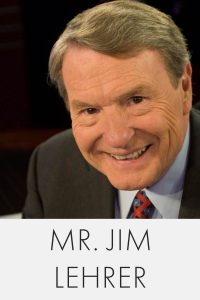 Born in Wichita, Kansas, in 1934, Jim Lehrer received an A.A. degree from Victoria College and a B.J. in 1956 from the University of Missouri before joining the Marine Corps. From 1959 to 1966, he was a reporter for The Dallas Morning News and then the Dallas Times-Herald. He was also a political columnist at the Times-Herald for several years and in 1968 became the city editor. Lehrer’s newspaper career led him to public television, first in Dallas, as KERA-TV’s executive director of public affairs, on-air host and editor of a nightly news program. He subsequently moved to Washington, DC, to serve as the public affairs coordinator for PBS, and was also a member of PBS’s Journalism Advisory Board and a fellow at the Corporation for Public Broadcasting. Lehrer went on to join the National Public Affairs Center for Television (NPACT) as a correspondent.

It was Lehrer’s work with NPACT that led to his initial association with Robert MacNeil and, ultimately, to their long-term partnership. In 1973, they teamed up to provide NPACT’s continuous live coverage of the Senate Watergate hearings, broadcast on PBS. Following that Emmy-winning collaboration, Lehrer was the solo anchor for PBS coverage of the House Judiciary Committee’s impeachment inquiry of Richard Nixon.

In October 1975, the half-hour “Robert MacNeil Report,” with Jim Lehrer as the Washington correspondent, premiered on Thirteen/WNET New York. Over the next seven years, “The MacNeil/Lehrer Report” (as it was renamed in 1976) won more than 30 awards for journalistic excellence. In September 1983, Lehrer and MacNeil launched their most ambitious undertaking, “The MacNeil/Lehrer NewsHour.” The 1995-96 season marked the 20th year of their journalistic odyssey, as well as MacNeil’s departure and Lehrer’s stewardship of the program as “The NewsHour with Jim Lehrer.” In 2009, the program title changed to “PBS NEWSHOUR” to reflect the program’s expanded role as the hub of news and public affairs programming on PBS both online and on air.

Lehrer has been honored with numerous awards for journalism, including the 1999 National Humanities Medal, presented by President Bill Clinton and First Lady Hillary Rodham Clinton. Also in 1999, Lehrer was inducted into the Television Hall of Fame with MacNeil and into The Silver Circle of the Washington, DC, Chapter of The National Academy of Television Arts and Sciences. He has won two Emmys, the Fred Friendly First Amendment Award, the George Foster Peabody Broadcast Award, the William Allen White Foundation Award for Journalistic Merit and the University of Missouri School of Journalism’s Medal of Honor. In 1991, he was elected a Fellow of the American Academy of Arts and Sciences. Jim Lehrer and his wife, Kate, have been married since 1960. They have three daughters – Amanda, Lucy and Jamie – and six grandchildren.