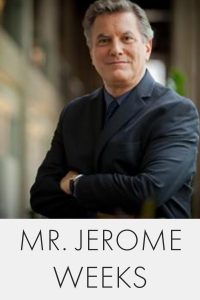 Jerome Weeks is the Art & Seek producer-reporter for KERA. A professional critic for more than two decades, he was the book columnist for The Dallas Morning News for ten years and the paper’s theater critic for ten years before that. His writing has appeared in the San Francisco Chronicle, Los Angeles Times, Newsday, American Theatre and Men’s Vogue magazines. Mr. Weeks was an entertainment reporter for the Houston Post and an associate editor for Third Coast magazine. He has won five Katie Awards from the Dallas Press Club, a graduate journalism fellowship from Columbia University and a Knight Digital Media Fellowship to the University of California-Berkeley. He has appeared onStudio 360, C-SPAN’s Booknotes and the PBS documentary Sweet Tornado: Margo Jones and the American Theater. Mr. Weeks is a member of both the National Book Critics Circle and the American Theatre Critics Association, and was recently named a fellow of the Dallas Institute of Humanities and Culture.