That’s a wrap! Stay tuned for our 2021 Fall Programming. Have a great Summer!

Based on Machiavelli’s reading of ancient writings and his own experience of modern politics and war, The Prince is filled with hard boiled advice on how to gain and keep power. The Prince is perhaps most famous for the assertion that it is better to be feared than loved. Yet just nine months after completing it, Machiavelli writes a letter to a friend to confess that he is himself desperately in love:

This rejection of the grave matters of politics and war startles any reader of his best-known works. Could the infamous Machiavel categorically reject his own thoughts on war and politics — in favor of love? Perhaps this embrace of love is as much literary performance as it is a true confession; perhaps it is just one of many oscillations between political and amorous obsessions. It is nonetheless vital for understanding Machiavelli’s thought and life. This course will examine The Prince on love and fear, then turn to several of his plays, poems, stories, and comic letters on love in an effort to come to understand and appreciate both “Machiavellis.” 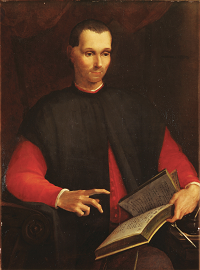 Ousted from government after 14 years of service to the republic of Florence, Niccolò Machiavelli (1468-1527) went on to write masterworks of Italian literature. Considered by some to be the originator of modern democratic thought, by others to be the father of modern power politics, and by still others the intellectual founder of the modern world itself, Machiavelli is a singularly important figure in the history of the West. At the height of the Italian Renaissance, Machiavelli looked backed to the ancient world for inspiration to transform the moral, political, and intellectual corruption of his day. He imagined a future world of freedom and prosperity in his enduring writings: a treatise on tyrannical rule (The Prince); a commentary on republican government (Discourses on Livy); the comic play: Mandragola, on sexual politics and religious corruption; and numerous other histories, stories, and poems.

Christopher Lynch earned his B.A. at St. John’s College and Ph.D. at the University of Chicago’s Committee on Social Thought. He held a postdoctoral fellowship at Boston College, has been a visiting professor at both the University of Dallas and the University of Chicago, and has served as Senior Advisor at the United States Department of State. He taught great books and political philosophy for twenty years at Carthage College, where he is Emeritus Professor of Political Science. His many publications include his interpretation and translation of Machiavelli’s Art of War (Chicago, 2003) and Principle and Prudence in Western Political Thought (with Jonathan Marks, SUNY, 2016). He has just completed a book on war in all of Machiavelli’s writings and begun a translation (with Nathan Tarcov) of all of Machiavelli’s stories, poems, and comic letters.