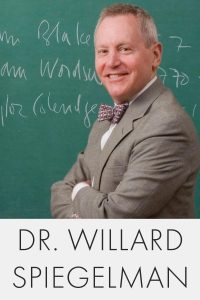 Willard Spiegelman is the Hughes Professor of English and American Literature, emeritus, at Southern Methodist University, where he taught from 1971 to 2017. He was also the editor-in-chief of the Southwest Review (1984-2016). He holds degrees from Williams College and Harvard University, and has won fellowships from the Guggenheim and Rockefeller Foundations, and the National Endowment for the Humanities. The author of thirteen books and many essays, he is also a longtime contributor to the arts pages of the Wall Street Journal.