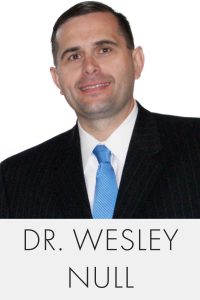 Dr. Wesley Null serves as Vice Provost for Undergraduate Education at Baylor University.  He completed his Ph.D. degree at the University of Texas at Austin, where he studied curriculum theory and history of education.  Prior to beginning his role as Vice Provost for Undergraduate Education, Dr. Null served as Associate Dean of Baylor’s Honors College, Acting Director of the University’s Honors Program, and director of Baylor’s Ph.D. in Curriculum & Teaching Program.  In addition to his Ph.D. from UT-Austin, Dr. Null holds a B.S.Ed. and an M.Ed. from Eastern New Mexico University.

Null has authored numerous books in the fields of curriculum theory and educational history, including Curriculum:  From Theory to Practice(Rowman and Littlefield, 2011), Peerless Educator: The Life and Work of Isaac Leon Kandel (Peter Lang, 2007), and A Disciplined Progressive Educator:  The Life and Career of William Chandler Bagley (Peter Lang, 2004).  He is also co-editor, with Diane Ravitch, of Forgotten Heroes of American Education: The Great Tradition of Teaching Teachers (Information Age Publishing, 2006).

Null has co-edited several other books as well, including American Educational Thought: Essays from 1640 to 1940 (Information Age Publishing, 2010) and The Pursuit of Curriculum: Schooling and the Public Interest(Information Age Publishing, 2006).  Null served as editor of the American Educational History Journal from 2006-2011 and also served as president of the American Association for Teaching and Curriculum from 2010-2011.

In his current role as Vice Provost for Undergraduate Education, Null collaborates with senior administration and faculty to coordinate and provide a common vision for undergraduate education at Baylor.