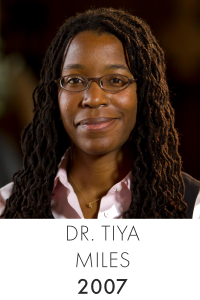 Her first book, Ties That Bind: The Story of an Afro-Cherokee Family in Slavery and Freedom, was published by the University of California Press in 2005 and received four awards from historical, humanities, American studies, and Native American studies associations, including the Frederick Jackson Turner Prize from the Organization of American Historians for the best first book in American history and recognition from the Native American and Indigenous Studies Association as one of the ten most influential books of the first decade of the twenty-first century. Her second book, The House on Diamond Hill: A Cherokee Plantation Story, was published by the University of North Carolina Press in 2010 and was awarded three historical book prizes including the best book award from the National Council on Public History. She is the co-editor, with Sharon P. Holland, of Crossing Waters, Crossing Worlds: The African Diaspora in Indian Country(2006).

Dr. Miles has appeared on various NPR programs to discuss her research and to comment on contemporary issues regarding race and American culture. She has written commentary for The New York Times, CNN In America, and the Huffington Post on issues ranging from Cherokee racial politics to Black History Month, to Detroit public land. She has also worked on a variety of public history projects.

Tiya is the founder of ECO Girls—Environmental and Cultural Opportunities for Girls in Urban Southeast Michigan—which she developed in 2005 after becoming concerned with environmental issues and climate change following Hurricane Katrina. She received a Mellon Foundation New Directions Fellowship in 2013 and used the fellowship to study environmental history at Montana State University.