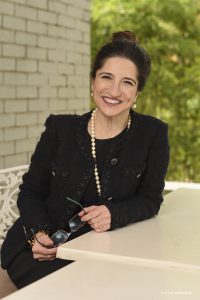 The Dallas Institute of Humanities and Culture is pleased to announce a change of leadership as the non-profit organization begins its fifth decade of offering public programs for North Texans. Dr. Seemee Ali has been chosen to lead the Institute as its first-ever President.

Dr. Ali comes to Dallas from Carthage College in Kenosha, Wisconsin, with her husband, Dr. Michael McShane. For their distinguished teaching, both are recognized as Professors Emeriti at Carthage, where they founded the college’s vibrant Hannibal Lecture Series and established its Lincoln Forum for the Liberal Arts. Dr. Ali is a graduate of Austin College with a B.A. in political science. She holds a Ph.D. from the Institute of Philosophic Studies at the University of Dallas. Since, she has served as Fellow of Harvard University’s Center for Hellenic Studies (CHS). Dr. Gregory Nagy, Harvard University’s Francis Jones Professor of Classical Greek Literature, wrote in his nominating letter: “I am in awe of her deep learning and her lively engagement with some of the most vitally important and timely topics in the field of classical studies.”

Dr. Ali’s assumption of the Dallas Institute Presidency is in a sense a homecoming. She has been closely involved with the work of the Institute since the 1990s, first as assistant to Drs. Louise and Donald Cowan, founders of the Institute’s Teachers Academy (now the Cowan Center™). After joining the staff of the Museum of Modern Art (NY), she returned to Dallas to serve as administrator for the Teachers Academy while pursuing her graduate studies at the University of Dallas. After leaving Dallas to teach on the Rome campuses of the University of Dallas and John Cabot University and, then, back in the United States, at Morgan State University, Villanova University, and Carthage College, she has since returned frequently to lecture at the Institute.

“After forty years of conducting public programs in Dallas, the Institute is indeed fortunate to have Dr. Ali to lead it into its future,” remarked Dr. Larry Allums, who served as Executive Director for twenty-three years. “She has an intimate understanding of its mission in our city and what it has achieved, and she brings a dynamic vision for what it can and should become.”

Dr. Ali has earned numerous accolades for her work in the humanities both within and outside academe. She has been a regularly invited lecturer in the Newberry Library’s Teachers Consortium (Chicago, IL). She has published essays on Homer’s Iliad, as well as on the twentieth-century American writers Wallace Stevens and William Faulkner. She has lived and led study tours in Rome, Italy, and has lectured and presented scholarly papers across the United States and abroad – on figures as varied as Toni Morrison, Mark Rothko, Salman Rushdie, W.E.B. DuBois, Aeschylus, and Homer.