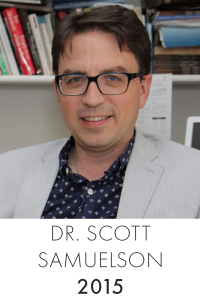 Dr. Scott Samuelson studied philosophy at Grinnell College (BA, 1995, valedictorian) and Emory University (PhD, 2001).  Since 2000 he has taught at Kirkwood Community College in Iowa.  In 2014 he was named Distinguished Humanities Educator by the Community College Humanities Association.  Inspired by his students, he wrote his first book The Deepest Human Life: An Introduction to Philosophy for Everyone (University of Chicago Press, 2014), which has been well received not just by prominent reviewers but by numerous non-philosophers who found their philosophical voice with its help.  The book is currently being translated into Chinese and Portuguese.  Samuelson also writes movie reviews for Little Village and hosts Ethical Perspectives on the News, a Sunday-morning talk show on KCRG, the local ABC affiliate. For a decade he moonlighted as a sous-chef at Simone’s Plain and Simple, a French restaurant on a gravel road.  He’s published articles in the Wall Street Journal, the Huffington Post, the Chronicle of Higher Education, The Philosopher’s Magazine, and Christian Century.  His article “Why I Teach Plato to Plumbers” in The Atlantic has been widely circulated.  He’s been interviewed on NPR and given various public lectures and talks, including a TEDx talk “How Philosophy Can Save Your Life.”  On top of his job at Kirkwood, he teaches philosophy at the Iowa Medical and Classification Center (a.k.a. Oakdale Prison).  He’s currently working on his second book, Seven Ways of Looking at Pointless Suffering.

Dr. Scott Samuelson was the recipient of the 2015 Hiett Prize in the Humanities.