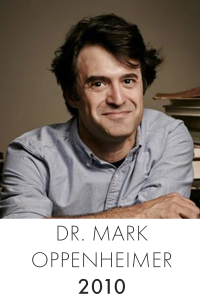 Dr. Mark Oppenheimer is the Dallas Institute’s 2010 Hiett Prize in the Humanities’ Recipient. He is a freelance writer, an editor, a lecturer in the English and Political Science departments as well as the Divinity School of Yale University, and the coordinator of the Yale Journalism Initiative. He received his B.A. in history from Yale in 1996 and earned his Ph.D. in Religious Studies, also from Yale, in 2003, receiving the John Addison Porter Prize for Best Dissertation in the Humanities. Dr. Oppenheimer is author of three books: Knocking on Heaven’s Door: American Religion in the Age of Counterculture, Thirteen and a Day: The Bar and Bat Mitzvah Across America, and, most recently, Wisenheimer: A Childhood Subject to Debate. In 2003, he was the first Koret Young Writer on Jewish Themes at Stanford University; he has also taught at Wesleyan, Hartford Seminary, and New York University. In 2010-2011 he taught creative writing at Wellesley College as the Robert Garis Visiting Fellow in Writing.

He presently writes a biweekly “Beliefs” column about religion for The New York Times, a column about fatherhood for The New Republic, and maintains a blog. His freelance writing on topics such as politics, urbanism, and family has appeared in Harper’s, The New York Times Magazine, The American Scholar, Slate, Details, Salon, Mother Jones, The New Yorker, and elsewhere. In 2000 and 2001, Oppenheimer was religion writer for the Hartford Courant, and from 2004 to 2006 he was the editor of the New Haven Advocate, an alternative weekly paper. He is an editor of The New Haven Review and an occasional commentator on NPR.

His most recent publication is The Zen Predator of the Upper East Side, an e-book published in a new series from The Atlantic about sex abuse in Zen Buddhism. He self-published an e-book titled Dan Savage: The First Gay Celebrity in 2012.

In the school year 2014-2015, Dr. Oppenheimer will be the Corcoran Visiting Professor of Jewish-Christian Relations at Boston College. He is currently writing about gender dynamics within the atheist and freethought movements and the problem of divorce in orthodox religious communities. He lives in New Haven, Conn., with his wife, four daughters, and two dogs.