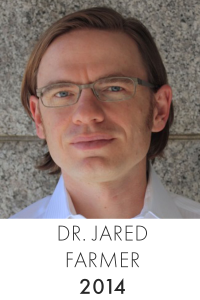 His book On Zion’s Mount: Mormons, Indians, and the American Landscape (Harvard University Press, 2008) won five prizes, including the Francis Parkman Prize from the Society of American Historians for the best-written non-fiction book on an American theme, a literary award that honors the “union of the historian and the artist.” His latest book, Trees in Paradise: A California History (W. W. Norton, 2013), received a John Brinckerhoff Jackson Book Prize from Foundation for Landscape Studies. Farmer maintains a Facebook page devoted to the Golden State’s treescape and dreamscape, and he tweets off and on.

Farmer frequently gives guest lectures and radio interviews. His essays and reviews have appeared in publications such as Science, Environmental History, Reviews in American History, High Country News, Western American Literature, and Religion Dispatches. He has also self-released three e-books, including The Image of Mormons: A Sourcebook for Teachers and Students (2013).

Currently he is working on two book projects: Ancient Trees in Modern Times (a history of the long search for the world’s oldest living thing, and a meditation on the future of long-lived trees in the Anthropocene) and The Aerial View (a global study of aerial photography, aerial surveillance, satellite imagery, and remote sensing).

Farmer was the recipient of the Dallas Institute’s 2014 Hiett Prize in the Humanities.