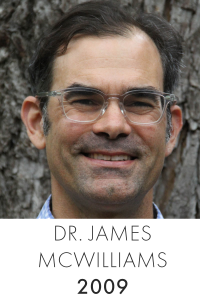 Dr. James E. McWilliams is the Dallas Institute’s 2009 Hiett Prize in the Humanities Recipient and is an Institute Fellow.

Dr. McWilliams is a historian, writer, and Professor of History at Texas State University-San Marcos. In 2007-2008 he was an Associate Fellow in the Program in Agrarian Studies at Yale University. His interests center on American history, with specializations in environmental, agricultural, and economic history. He is the author of five books: The Pecan: A History of America’s Favorite Nut (University of Texas Press, 2013), Just Food: Where Locavores Get It Wrong and How We Can Truly Eat Responsibly (Little, Brown, 2009), A Revolution in Eating: How the Quest for Food Shaped America (Columbia University Press, 2005), Building the Bay Colony: Economy and Society in Early Massachusetts (University of Virginia Press, 2007), and American Pests: The Losing War on Insects from Colonial Times to DDT (Columbia University Press, May 2008).

In addition to writing academic books, McWilliams publishes frequently in the popular press, including The New York Times, Harper’s, The Washington Post, Slate, The American Scholar, and The Texas Observer. He is a frequent contributor to Freakonomics.com, Conservation, Pacific Standard, Laika Magazine, and The Dodo, and from 2009-2012 he was an online columnist on food issues for The Atlantic Monthly. His literary non-fiction has appeared in The Millions, Quarterly Conversation and The New York Times Book Review. He also blogs regularly on his website.

Current projects include two books. One, tentatively titled A Graceful Distance: The Cultural Origins of Factory Farming in the United States (Cornell University Press), explores the transformation of the human-farm animal relationship that provided the cultural and psychological foundation for large-scale animal agriculture in the nineteenth century.  The second, tentatively titled Modern Savage: Our Unthinking Decision to Eat Animals (St. Martin’s), investigates the hidden ethical, environmental, and economic problems with small-scale animal agriculture today, insisting that a plant-based diet is the most effective answer to the problems of industrial animal agriculture.

He holds a B.A. in philosophy from Georgetown University (1991), an M.Ed. from Harvard University (1994), an M.A. in American studies from the University of Texas (1996) and a Ph.D. in history from Johns Hopkins University (2001). He lives in Austin with his wife, Leila Kempner, and two children.