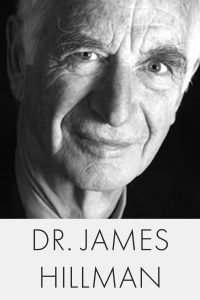 Dr. James Hillman is a Founding Fellow of the Dallas Institute and is, among his many other achievements, creator and founder of Archetypal Psychology, a movement and school of thought that has had a profound impact, beyond Freud and Jung, on the way the discipline of psychology is regarded and practiced, and the way we view the world psychologically.

In 1959 Dr. Hillman was named Director of Studies of the Jung Institute in Zurich, where he served until 1969. Around 1960, he began what has become a highly distinguished publishing career now in its fifth decade. He returned to the U.S. in 1978, joining Drs. Louise and Donald Cowan and Robert Sardello at the University of Dallas. This was where he also began his acquaintance and work with Drs. Joanne Stroud and Gail Thomas.

In 1970 he became editor of Spring Publications, and it was then that he began the movement that would become known as “archetypal psychology,” which among other things aimed to broaden the concerns of psychology beyond its focus on personal therapy to include an imagination of culture through myth, poetry, the arts, and other creative expressions of human experience—that is, to turn psychology toward the world. Through this important, extended work, he is credited with being a central figure in returning “soul” to psychology, and much of that return was accomplished here in Dallas, at the University of Dallas and at the Dallas Institute.

Dr. Hillman received a Pulitzer Prize nomination in 1975 and the Medal of the Presidency of the Italian Republic in 2001, for the creativity of his thinking. He has held distinguished lectureships at the Universities of Yale, Princeton, Chicago, and Syracuse, and his books have been translated into some twenty languages. Among his many volumes are The Soul’s Code: In Search of Character and Calling (a NY Times bestseller), The Force of Character, Re-Visioning Psychology, The Dream and the Underworld, Suicide and the Soul (a landmark book that re-introduced the term “soul” into psychological discourse), A Terrible Love of War, Healing Fiction, Pan and the Nightmare, and Archetypal Psychology: Volume One of the Uniform Edition of the Writings of James Hillman (published by Spring Publications in conjunction with Dallas Institute).