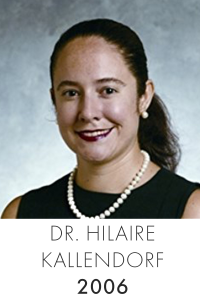 2006 Hiett Prize in the Humanities Recipient, Dr. Hilaire Kallendorf is Professor of Hispanic and Religious Studies at Texas A&M University, where she also directs the doctoral program for the Department of Hispanic Studies.  She holds a Ph.D. in Comparative Literature from Princeton University.  She was a postdoctoral research fellow at UCLA and an American Council of Learned Societies/Andrew W. Mellon Junior Faculty Fellow.  In addition to the 2006 Hiett Prize in the Humanities, she has been awarded a Howard Foundation Mid-Career Fellowship from Brown University along with other research grants from the Renaissance Society of America, the Bibliographical Society of America, the Ford Foundation, Spain’s Ministry of Culture, and the National Endowment for the Humanities.

Her research and teaching deal with many aspects of religious experience, especially as belief relates to literature and culture.  She is the author of three academic monographs, Exorcism and Its Texts:  Subjectivity in Early Modern Literature of England and Spain (University of Toronto Press, 2003); Conscience on Stage:  The Comedia as Casuistry in Early Modern Spain (University of Toronto Press, 2007); and Sins of the Fathers: Moral Economies in Early Modern Spain (University of Toronto Press, 2013).  She is general editor of A New Companion to Hispanic Mysticism (Leiden: Brill, 2010), which won the 2011 Bainton Book Prize for Reference Works from the Sixteenth Century Society, and co-author with Cliff Richey of a memoir, Acing Depression: A Tennis Champion’s Toughest Match (Washington, D.C.: New Chapter Press, 2010).  She translated Spanish Baroque poet Francisco de Quevedo’s Silvas into English (Lima, Peru: Universidad Nacional Mayor de San Marcos, 2011) and has coordinated a translation team for two volumes of poetry by living Chilean poet David Rosenmann-Taub. Her edited volume A Companion to Early Modern Hispanic Theater (Brill, 2014) was selected for inclusion in the Renaissance Society of America’s new Texts and Studies.

She has also published articles in peer-reviewed journals on such topics as self-exorcism, piety and pornography, ghosts, Taíno religious ceremonies, and Christian humanism in the Renaissance, as well as entries on Spain, Spanish Literature, Miguel de Cervantes, and Hispanic Mysticism for the Renaissance and Reformation edition of the Oxford Bibliographies Online. Most recently she was commissioned by the Renaissance Society of America to edit A Companion to the Spanish Renaissance.