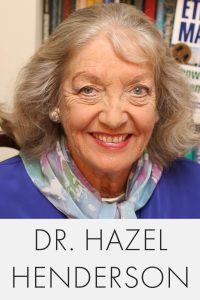 Dr. Hazel Henderson is the founder of Ethical Markets Media, LLC and the creator and co-executive Producer of its TV series. She is a world renowned futurist, evolutionary economist, a worldwide syndicated columnist, consultant on sustainable development, and author of The Axiom and Nautilus award-winning book Ethical Markets: Growing the Green Economy (2006) and eight other books. She co-edited, with Harlan Cleveland and Inge Kaul, The UN: Policy and Financing Alternatives, Elsevier Scientific, UK 1995 (US edition, 1996).

Since becoming a full-time TV producer, Hazel has stepped down from her many board memberships, but she remains on the International Council of the Instituto Ethos de Empresas e Responsabilidade Social, Sao Paulo, Brasil, a Patron of the New Economics Foundation (London, UK) and a Fellow of the World Business Academy. The first version of her Country Futures Indicators (CFI©), an alternative to the Gross National Product (GNP), is a co-venture with Calvert Group, Inc.: the Calvert-Henderson Quality-of-Life Indicators.

In addition, she has been Regent’s Lecturer at the University of California-Santa Barbara, held the Horace Albright Chair in Conservation at the University of California-Berkeley, and advised the U.S. Office of Technology Assessment and the National Science Foundation from 1974 to 1980. She holds Honorary Doctor of Science degrees from the University of San Francisco, Soka University (Tokyo) and Worcester Polytechnic Institute, Massachusetts (USA). She is an active member of the National Press Club (Washington DC), the World Future Society (USA), a Fellow of the World Futures Studies Federation and a member of the Association for Evolutionary Economics. Henderson has many awards and is listed in Who’s Who, USA, Who’s Who in the World, Who’s Who in Business and Finance and Who’s Who in Science and Technology. She is an Honorary Member of the Club of Rome. She shared the 1996 Global Citizen Award with Nobelist A. Perez Esquivel of Argentina. She is a Fellow of the Dallas Institute of Humanities and Culture and in 2007 was elected a Fellow to Britain’s Royal Society of Arts.