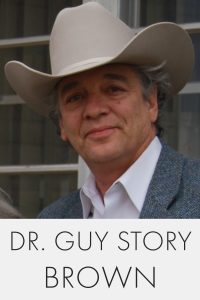 Guy Story Brown received his Ph.D. in Politics & Literature from the Institute of Philosophical Studies at the University of Dallas in 1979, with a dissertation entitled, “Longinus’ On the Sublime: The Political Foundations of Literary Criticism.” He has lectured widely and taught undergraduate and continuing education courses at Northwood University and Dallas Christian College in the Dallas area, and Georgetown University in Washington, D.C. He is currently Professor of Philosophy & Literature at Lubbock Christian University in Lubbock.

Dr. Brown was Director of Research in Public Diplomacy at the Institute for International Strategic Studies in association with the University of Miami in Bethesda, Md, 1981-82, and head of the US Information Agency’s international book publishing, library, and English teaching programs from 1982-1988, where he arranged for the publication of the Federalist Papers and other titles in Russian, Spanish, Hindi, Arabic, and other languages, and led negotiations between US publishers and ministerial-level Soviet, East German, and Chinese publishing authorities in Frankfurt, Moscow, Washington, D.C., and Beijing. He was Director of the USIA Office Academic Programs, administering the Fulbright Scholarships, the world’s largest academic exchange program, 1988-1992, where he extended academic relations in the Soviet Union and Eastern Europe and led regional Fulbright conferences in Amsterdam, Holland, and Rabat, Morocco.

Brown received the Guttenberg award at the Frankfurt International Book Fair and was awarded the Ivan Fedorov medal by the Soviet Government and the Benjamin Franklin Distinguished Service medal by the US Government Printing Office. He received the Distinguished Service Award from the J.W. Fulbright Board of Foreign Scholarships for his work as head of the international Fulbright scholarships and related academic programs, 1988-1992.

Dr. Brown was lead presenter on the topic of “Democratization in Non-European ‘New’ Democracies” at the Conference on Democratization, Culture, and the Relations between Nations, sponsored by the FRG Bundeszentrale Fur Politische Bildung and US Center for Civic Education in Santa Monica, California and Freiburg, Germany, 2002, 2005. He is Director of The Straight Gate, a 501(c)3 prison aftercare program coordinating numerous regional prison ministries and serving more than 100 persons per year in South Oak Cliff, Dallas.