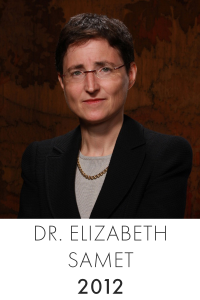 Elizabeth D. Samet holds a Ph.D. in English Language and Literature from Yale. Since 2007, she has been a full professor of English at the United States Military Academy at West Point, where she has taught in various capacities for more than 15 years. Her books include Willing Obedience: Citizens, Soldiers and the Progress of Consent in America, 1776-1898 and Soldier’s Heart: Reading Literature Through Peace and War at West Point, which won the Los Angeles Times Book Prize for Current Interest and was named one of The New York Times’s 100 Notable Books of 2007. She awaits the publication of her next book, No Man’s Land: Preparing for War and Peace in Post-9/11 America, which will be released in November 2014 from Farrar, Straus and Giroux.

Her essays and reviews have been published in various venues, including The New York Times Magazine, The New York Times Book Review, and The New Republic. She has also appeared on the NewsHour with Jim Lehrer, NPR, and the BBC World Service. Dr. Samet was awarded a Guggenheim Fellowship in 2011 which helped support the writing of her latest book project, Crimes of Odysseus: Imagining Postwar America, about mythologies of the war veteran in American culture, specifically in Hollywood cinema.

Dr. Samet was the recipient of the Dallas Institute’s 2012 Hiett Prize in the Humanities.