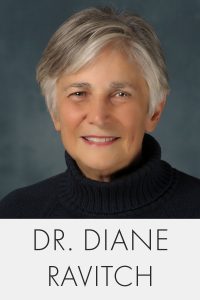 Dr. Diane Ravitch is Research Professor of Education at New York University and a historian of education. In addition, she is a nonresident senior fellow at the Brookings Institution in Washington, D.C. She shares a blog called Bridging Differences with Deborah Meier, hosted by Education Week. She also blogs for politico.com/arena and Huffingtonpost.com. Her articles have appeared in many newspapers and magazines. From 1991 to 1993, she was Assistant Secretary of Education and Counselor to Secretary of Education Lamar Alexander in the administration of President George H.W. Bush. She was responsible for the Office of Educational Research and Improvement in the U.S. Department of Education. As Assistant Secretary, she led the federal effort to promote the creation of voluntary state and national academic standards. From 1997 to 2004, she was a member of the National Assessment Governing Board, which oversees the National Assessment of Educational Progress, the federal testing program. She was appointed by the Clinton administration’s Secretary of Education Richard Riley in 1997 and reappointed by him in 2001. From 1995 until 2005, she held the Brown Chair in Education Studies at the Brookings Institution and edited Brookings Papers on Education Policy. Before entering government service, she was Adjunct Professor of History and Education at Teachers College, Columbia University. Her most recent book is The Death and Life of the Great American School System: How Testing and Choice are Undermining Education.