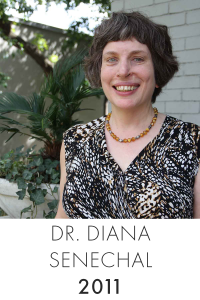 Dr. Diana Senechal is the 2011 winner of the Hiett Prize in the Humanities and a frequent contributor to literary and cultural discussion. Her first book, Republic of Noise: The Loss of Solitude in Schools and Culture (Rowman & Littlefield Education, 2012) was named an Outstanding Academic Title of 2012 by Choice; the poet Rosanna Warren praised its “erudition and quiet wisdom.”

A Yale University graduate (BA, MA, and PhD), she began public school teaching in 2005. From 2011 to 2016, she taught philosophy at Columbia Secondary School for Math, Science, & Engineering, where she created a high school philosophy curriculum, taught courses and mentored teachers, and guided her students in the creation and publication of the philosophy journal CONTRARIWISE, which now has international readership and participation. In May 2017, she taught for two weeks as a guest lecturer at the Lycée Sainte Pulchérie in Istanbul. She now teaches English and civilization at the Varga Katalin Gimnázium in Szolnok, Hungary.

Since July 2011, she has served on the faculty of the Dallas Institute’s Sue Rose Summer Institute for Teachers. A member of the council of ALSCW (Association of Literary Scholars, Critics, and Writers, she contributes to ALSCW conferences, publications, and decisions. At her Budapest synagogue, Sim Shalom, she serves as cantor, leading the musical parts of services. In her free time, she does volunteer work for the Budapest Festival Orchestra and goes exploring on bicycle.