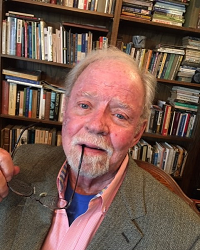 Dennis Patrick Slattery, Ph.D., has for the past twenty-seven years been a Core Faculty member in the Mythological Studies Program at Pacifica Graduate Institute in Carpinteria, CA, where he holds the rank of Distinguished Professor Emeritus.  He has taught for the past fifty-two years at the elementary, secondary, undergraduate, and graduate levels. From 1984-87, he taught teachers the classics of literature in the Dallas Institute of Humanities and Culture’s Summer Program for Teachers. He also taught for six years at the Fairhope Institute of Humanities and Culture’s Summer Program for high school teachers under the direction of Dr. Larry Allums, Executive Director Emeritus of the Dallas Institute. He is the author, co-author, editor, or co-editor of thirty volumes as well as over two hundred articles in books, magazines, newspapers and online journals. His titles include: The Idiot: Dostoevsky’s Fantastic Prince (1984); The Wounded Body: Remembering the Markings of Flesh (2000); A Pilgrimage Beyond Belief:Spiritual Journeys through Christian and Buddhist Monasteries of the American Wes (2017); Harvesting Darkness: Essays on Literature, Myth, Film and Culture (2006); With Glen Slater he coedited Varieties of Mythic Experience: Essays on Religion, Psyche and Culture (2008); with Jennifer Selig he co-edited Reimagining Education: Essays on Reviving the Soul of Learning (2009); Day-to-Day Dante: Exploring Personal Myth Through The Divine Comedy (2012); Our Daily Breach: Exploring Your Personal Myth Through Herman Melville’s Moby-Dick; An Obscure Order: Reflections On Cultural Mythologies (2020); with Deborah Anne Quibell and Jennifer Leigh Selig, he has coauthored Deep Creativity: Seven Ways to Spark Your Creative Spirit, which won first place in the 2020 Nautilus Book Awards under the category “Creativity and Inspiration.”  He has also published seven volumes of poetry and one novel. He offers (W)riting Retreats on personal mythology using the writings of Joseph Campbell and others to Jungian groups and other organizations in the United States and Europe.