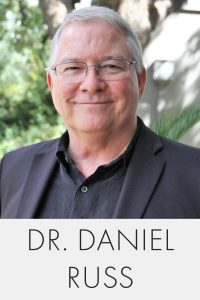 Dr. Daniel Russ is a consultant with the Dallas Institute’s Louise and Donald Cowan Center for Education and a faculty member of the Cowan Center’s Summer Institute for Educators. He has contributed to all four volumes of the Institute’s literary genre series edited by Louise Cowan, his teacher and dissertation director. Dr. Russ also serves on the Advisory Board and Foundation Board for the Jackson Hole Classical Academy. He retired in 2015 as academic dean and faculty member of Gordon College in Wenham, Massachusetts where he served for thirteen years. He is also a senior fellow of the Trinity Forum where he is a seminar moderator, a contributor to several curricula of TTF, and writer and general editor to the curriculum Children of Prometheus: Technology and the Good Life. Prior to Gordon College, he was the headmaster at Trinity Christian Academy in Addison, Texas, where he previously taught high school students and was Managing Director of the Dallas Institute. In addition to his Institute publications, he has contributed to a number of publications on education, first and second editions of his book Flesh-and-Blood Jesus: Learning to Be Fully Human from the Son of Man, and co-editor of The Hermeneutics of Hell: Visions and Representations of the Devil in World Literature. Dan and his wife Kathy live in Centennial, Colorado.