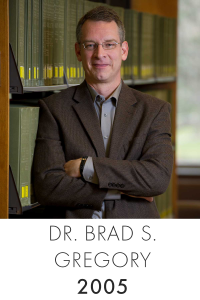 2005 Hiett Prize in the Humanities’ Winner, Dr. Brad Gregory is Professor of History and Dorothy G. Griffin Collegiate Chair at the University of Notre Dame, where he has taught since 2003. He also serves as Director of the Notre Dame Institute for Advanced Study. From 1996-2003 he taught at Stanford University, where he received early tenure in 2001. He was the recipient of two teaching awards at Stanford and has received three more at Notre Dame. He specializes in the history of Christianity in Europe during the Reformation era and on the long-term influence of the Reformation era on the modern world.  Before teaching at Stanford, he earned his Ph.D. in history at Princeton University (1996) and was a Junior Fellow in the Harvard Society of Fellows (1994-96).  He also has two degrees in philosophy from the Catholic University of Louvain, Belgium (1984, 1987) as well as an M.A. in history from the University of Arizona (1989).

Gregory’s first book, Salvation at Stake: Christian Martyrdom in Early Modern Europe
(Harvard, 1999), received six book awards.  He has also edited The Forgotten Writings of the Mennonite Martyrs (Brill, 2002) and co-edited Seeing Things Their Way: Intellectual History and the Return of Religion (Notre Dame, 2009). His most recent book is a wide-ranging reinterpretation of the making of the modern Western world entitled The Unintended Reformation: How a Religious Revolution Secularized Society (Belknap, 2012).  In addition to a short book on why history matters and another about the relationships among different sorts of knowledge, he is currently working on a history of conceptions of human nature from the Middle Ages to the present, the tentative title of which is “Embodied Souls and Their Rivals.”