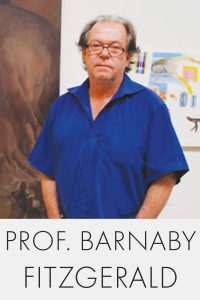 Prof. Barnaby Fitzgerald divides his time between teaching and painting in the United States, and painting and video work in Togo, West Africa, and Umbria in central Italy. He has shown in Italy, France, the United Kingdom and New York City. Currently he is represented by Meredith Long & Co., Houston, and Valley House Gallery in Dallas, Texas.

In 1979, Fitzgerald was a fellow of the Camargo Foundation in Cassis, France, where he painted and drew Provençal landscapes for a year. In 1985 he won an award from the Ingram Merrill Foundation, New York City.

“To enter Barnaby Fitzgerald’s Dallas studio is to enter a world of astonishing beauty, …” writes Frederick Turner, Founders Professor of Arts and Humanities at the University of Texas at Dallas. “In Barnaby Fitzgerald, the Texas sensibility is wonderfully married to the classical European tradition back through the Renaissance to classical Rome and Greece.”

Fitzgerald’s work is in several private collections and in the Yale Art Gallery print collection, the Museum of Fine Arts in Houston and other museums.