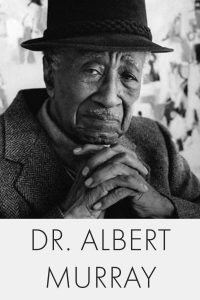 Dr. Albert Murray’s contribution to African-American literature has established the value and importance of the “blues idiom” as the basis for approaching life as an African American. Born in Nokomis, Alabama, on May 12, 1916, Murray received his B.S. from Tuskegee Institute in 1939. He joined the Air Force in 1943 and retired with the rank of major in 1962. During his period in the service, Murray earned his M.A. from New York University (1948) and taught literature and composition to civilians and soldiers both in the United States and abroad.

The Omni-Americans (1970), Murray’s first book, contains reviews, essays, and commentaries that engage and challenge the predominant frameworks within which matters of race and culture were then being discussed. Critiquing what he called “the folklore of white supremacy and the fake lore of black pathology,” the book argues that all Americans are multicolored and that social scientific attempts to explain black life in America are fundamentally mistaken. His next book, South to a Very Old Place (1971), extends that argument with a series of memoirs, interviews, and reports that document the positive nurturing aspects of the African-American community in the South.

In 1972, Albert Murray was invited to give the Paul Anthony Brick Lectures on Ethics at the University of Missouri. These lecturers were published as The Hero and the Blues (1973). Here Murray develops his concept of literature in the blues idiom, a theory he eloquently practiced in the novel Train Whistle Guitar(1974), which won the Lillian Smith Award for Southern Fiction. The hero of this novel received from his family and neighbors in the segregated South the cultural equipment necessary for leading a successful life-a sense of fundamental individual worth combined with community responsibility akin to the relationship between the improvising jazz soloist and the supporting band.

In 1976, Murray turned the concept of the blues idiom back on itself, writing perhaps the best book ever published on jazz aesthetics, Stomping the Blues, Murray collaborated with Count Basie on his autobiography, Good Morning, Blues (1985), and in 1991 published The Spyglass Tree, the long-awaited sequel to his first novel. A catalog essay on the paintings of Romare Bearden (Romare Bearden, Finding the Rhythm, 1991) extends Murray’s concepts of improvisation, rhythm, and synthesis even to the realm of the visual arts.