The campus of the Dallas Institute of Humanities and Culture, comprising of Thomas Hall, the newly renovated Stroud House, Cour Regard, and Nancy Cain Marcus Conference Center (soon to be Cain Robertson Hall, after renovations) has a long history of engagement with the arts and civic life of the city.

During the mid-1800s the site of the Dallas Institute was owned by J.M. Howell, whose interest in horticulture led him to open Howell’s Dallas Nursery. Howell dreamt of giving Dallas more shade and called his nursery an “experimental orchard.” Wanting to see what plants were best suited for the climate, he imported the first commercial shipment of plants into the state of Texas. He discovered that peaches and blackberries grew well in the arid climate and he is credited with starting the agricultural production of these fruits.

When the Railroad came to Dallas in 1872 and 1873, J.M. Howell sold his land to the real estate developers Murphy & Bolanz who platted and sold plots to the booming population. 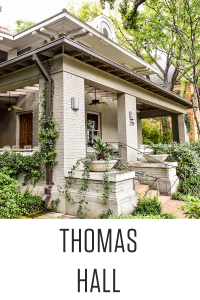 Thomas Hall, located at 2719 Routh Street, was built in the early 1900s, and much of its life remains a mystery.

In the late 1960s, the Routh Street area was known as Gallery Row. At that time, renowned art dealer Rual Askew acquired the home for his own gallery. Business flourished, and in his success, Askew built an addition onto the original structure.

In 1980, the property was purchased to house the Dallas Institute. It currently holds both the administrative offices and the Louise and Donald Cowan Center for Education. 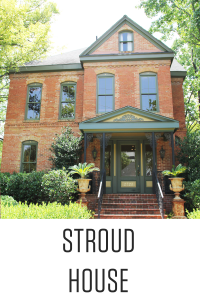 In the last century, the home has housed numerous residents including the Ambler family. Mrs. Ambler was a part of social circles such as the women’s Pierian Club, whose purpose was to “gain knowledge” and whose name was inspired by the Greek myth of the winged horse Pegasus and Alexander Pope’s poetic phrase “A Little Learning.”

The Pierian Spring on Mount Olympus was a gift to the Muses from Pegasus. The spring, which arose at the spot where Pegasus’ hoof struck the ground, was believed to be the fountain of knowledge and creativity that inspired all who drank from it.

From Alexander Pope:
“A little learning is a dangerous thing;
Drink deep, or taste not the Pierian Spring:
There shallow draughts intoxicate the brain,
And drinking largely sobers us again.”

The image of Pegasus is the most prominent feature of the Dallas Institute’s visual identity and creates a tie to the city, known for its red and neon Pegasus. The historic Pegasus was originally displayed atop the Magnolia Oil Company’s building in 1934 and became a symbol for the city.

From 1930 to 1956, the Turner family occupied the home with their seven children. Mrs. Turner was involved in city elections and hosted benefit teas, including the “Silver Tea” for the presentation of Mrs. W.J. Stroud, of no relation to the future benefactress Dr. Joanne Stroud.

In 1973, Mr. Alan Frakes purchased the home and opened the “Frame House.” Over the years, he leased areas within the property to businesses such as Gibson-Bryant Fine Prints, local jewelry designers, and antique dealers. 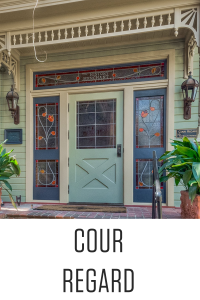 Cour Regard, located at the Stroud House, is notably one of the most unique spaces of the Dallas Institute. Built in 1987 by Richard Hazlett Jr., the building was known as the History Merchant, a bookstore dealing in rare books. The structure was completely built by hand with thoughtful details such as stained glass, which creates a prism in the sunlight, and imported flooring.

Cour Regard is currently used as an area for events such as “Classics at Cour Regard,” which explores great literary works through music, dramatic portrayals, food, and more.

Nancy Cain Marcus Conference Center, the largest of all campus spaces, is used for events such as the James Hillman Symposium, the Hiett Prize in the Humanities Forum, and more. The Center now sits where two houses were built and rebuilt several times. In 1962, The Church of the Incarnation purchased the land, removed both houses and built the existing structure, which was maintained as a discount store. In the 2021 year, look forward to renovations and a rechristening to the Cain Robertson Hall.

Interested in renting a space at the Dallas Institute? Contact us for a tour and pricing at 214-871-2440.