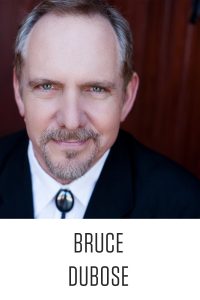 Bruce DuBose is the co-founder and Producing Artistic Director of Undermain Theatre where he has acted, directed, designed and produced for 36 years with his wife and artistic partner Katherine Owens. He has directed Undermain productions such as JOHN by Annie Baker, Eurydice by Sara Ruhl, The Castle by Howard Barker and Swedish Tales of Woe by Erk Ehn among others. He has performed in productions such as An Iliad, Henrik Ibsen’s The Lady from the Sea, Chekhov’s Three Sisters, Bertolt Brecht’s Galileo, and Harold Pinter’s The Birthday Party among many others. Other area stage work includes Antony and Cleopatra at the Shakespeare Festival of Dallas, Arms and the Man at the Dallas Theater Center, Fool For Love at Stage West. NYC stage appearances include Mud into Gold at H.E.R.E, Swedish Tales of Woe and Glamour at the Ohio Theatre, The Inner Circle at the Sandy Shurin Theatre and Undermain’s tour of Neil Young’s Greendale at the ICE Factory Festival. Independent films include Spring Eddy, I Become Gilgamesh, Dusk and Late Bloomers. Television appearances: Prison Break, Walker Texas Ranger, The Deep End, Dangerous Curves, and Friday Night Lights. Animation voice-over characters include Marcus Kincaid in Borderlands, King Neptune in One- Piece on the Funimation network, Thor in the video game series SMITE, and the Boomer in Gears of War. National Documentary voice-over work includes narration for the Emmy-winning PBS documentary series The US/Mexican War, and PBS documentary The Marines.