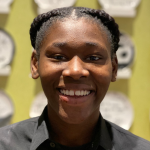 Jade Smith is a 17 year old intern at Café Momentum.  A native of West Dallas, Jade is one of nine siblings.  Jade’s first encounter with the justice system was at 11 years old when she was charged with “aggravated assault with a deadly weapon” while trying to break up a fight between her sister and cousins.  She has continued to drift in and out of the system since.

Jade heard about Café Momentum through another intern and joined the program November 2019.

While at Café Momentum, Jade has excelled as a server using her outgoing personality, charisma and time management skills.  Jade is currently enrolled in the Café Momentum Home School and plans to graduate in May 2020.  Upon graduating from high school and Café Momentum, Jade plans to go to college and eventually law school.  Jade would like to become a criminal defense attorney. 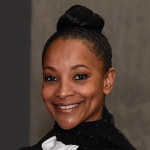 Sharanda Jones is a passionate advocate for criminal justice reform. Her story is nothing short of inspirational. She was sentenced in 1999 to mandatory life without parole for her role in a nonviolent drug conspiracy – her first ever arrest and conviction. Her experience is a true indictment of our ailing criminal justice system.

Determined not to let a life sentence establish her fate, Sharanda maintained a positive attitude and worked each day in prison to better herself and those around her. Her case garnered national attention and was featured on the front page of the Washington Post as well as covered in numerous publications such as the New York Times, CNN, Huffington Post, and The Guardian. An online Change.org petition received over 275,000 signatures from people all over the world calling for her release. After serving 16 years and 9 months in prison, Sharanda was granted clemency by President Obama on December 18, 2015. This act of mercy by the President literally saved her life.

Sharanda is co-founder of the Buried Alive Project and works tirelessly to use her story to promote much needed change with the criminal justice system and to deter others from following the path she did. It is her greatest hope that if her journey can help save at least one person from taking the wrong path she took, then her entire experience will all have been worth it in the end.

Sharanda is the mother of a 27-year old daughter and a new grandmother to a beautiful baby girl. 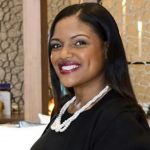 Yulise Reaves Waters, Esq. is the Director of Dallas Programs for the Lone Star Justice Alliance (LSJA) where she oversees the programmatic, data, and community engagement aspects of the Second Chance Community Improvement Program (SCCIP – pronounced “skip”), one of two Transformative Justice programs managed by LSJA.  Under the Transformative Justice model, Waters is a part of the team that will, in 2020, in partnership with the University of Texas Health School of Public Health, the Texas A & M University Public Policy Research Institute, and the Harvard University Access to Justice Lab, launch a criminal justice randomized control trial (RCT).  The RCT will track program participants’ health and criminal justice outcomes, perform cost-benefit-analysis, and process evaluations in both programs to determine whether community-based treatment programs are more effective for emerging adults than incarceration.  This is the first study of its kind in the United States since the mid-1960’s, and it has the potential to provide the most comprehensive evidence in favor of treatment over incarceration. Previously, Waters was an Assistant City Attorney for the City of Dallas, where she co-founded SCCIP – the first-ever young adult court in the State of Texas.  In 2018, SCCIP was awarded the National Association of Drug Court Professionals’ Equity and Inclusion Award for “excellence and leadership in demonstrating and promoting cultural proficiency in treatment court services.”  Prior to assuming her role with the City of Dallas, Waters was a founding partner, along with SMU Law Alumna, the late Gay G. Cox, of Cox Waters, P.L.L.C., a boutique Dallas law firm specializing in family law, collaborative practice and mediation.  Waters holds B.A. degrees in English (magna cum laude) and Spanish (magna cum laude), a B.B.A. in Organizational Behavior and Business Policy (magna cum laude), and a Juris Doctorate, all from Southern Methodist University.  She is a member of the Inaugural Emerging Leader Board at the Dedman School of Law, which recognizes graduates over the last twenty years who have “a strong record of leadership in the legal profession and a proven commitment to public service.” Waters holds memberships in the American Bar Association, the Texas Bar’s Juvenile Law, Criminal Justice, and Collaborative Law Sections, and is an appointed member of the Collaborative Law Section Council of the State Bar of Texas. Nationally, her commentaries on race and justice have been featured on syndicated radio and in major U.S. city newspapers. Waters is the recipient of numerous honors including Dallas Business Journal “40 Under 40,” DFW Millennial-to-Watch, SMU Black Alumni’s History Maker Award, and Honorable mention for the State Fair of Texas’ Juanita Craft Humanitarian Catalyst/Community Builder Award given to “individuals under 40 years old that are making an impact in civil and human rights in the city of Dallas by creating new initiatives and opportunities.”  Waters has also been named “One-to-Watch” by SMU Magazine and listed as a “Featured Graduate” of SMU Dedman Law by The Quad Magazine, Who’s Who in Black Dallas, and to the City of Dallas’ Wall of Honor for meritorious service to the citizens of Dallas.  Waters is licensed to preach in the African Methodist Episcopal Church.  And she is married to the Rev. Dr. Michael W. Waters.  They have three children. 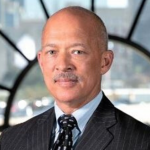 John Creuzot is a retired Judge and an award-winning lawyer with more than three decades of experience in the criminal justice system, including more than 21 years as a Felony District Court Judge. His background also includes seven years of service as a Dallas County Assistant District Attorney and Chief Felony Prosecutor as well as a criminal defense lawyer while in private practice.

In addition to his trusted service on both sides of the bench, Creuzot has earned a national reputation for his innovative work on drug courts, criminal justice reform and evidence-based sentencing. He regularly appears in the news and on television as an expert on these and other criminal justice topics. He has lectured and taught courses at the National Drug Court Institute, the National Judicial College, and the National Center for State Courts. He has also presented at several national training conferences for the National Association of Drug Court Professionals, and has taught drug court teams from across the country. Creuzot has lectured and directed seminars for the Texas Center for the Judiciary, the Texas Bar Association, and the National Association of Drug Court Professionals.

After his retirement from the judiciary, Dallas County honored Creuzot by renaming its drug treatment facility the Judge John C. Creuzot Judicial Treatment Center in May of 2013. The center provides an intensive residential program as an alternative to incarceration for Dallas County probationers. The facility is coordinated with the Dallas Community Supervision and Corrections Department and the Dallas County Courts. The center works to ensure successful substance abuse treatment and reintegration into the community. It also offers education and skills training and job search assistance to probationers, and education and counseling for family members.