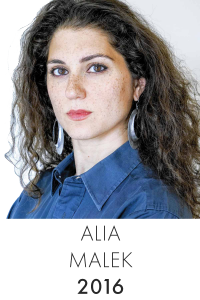 2016 Hiett Prize Winner, Alia Malek was born in the U.S. of Syrian parents who planned to return to their homeland but instead began an unplanned life in diaspora as immigrants. Alia earned a Bachelor of Arts degree at Johns Hopkins and a Juris Doctorate at Georgetown University Law Center. For several years her legal work in civil rights took her to Washington, the West Bank, and Lebanon. In 2006, she received a Masters degree in Journalism from Columbia University and entered her writing career in earnest. After living and writing anonymously for two years in Damascus, Alia returned to the U.S. for the launch of Al Jazeera America. She is author of A Country Called Amreeka: U.S. History Re-told Through Arab American Lives and editor of Patriot Acts: Narratives of Post-9/11 Injustices. Her book The Home That Was Our Country: A Memoir of Syria was published in 2017.

Read the New York Times’s review of Alia’s book The Home That Was Our Country: A Memoir of Syria.