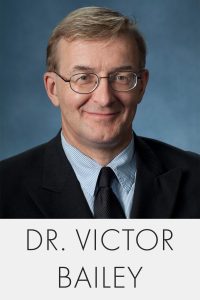 Dr. Victor Bailey is the Charles W. Battey Distinguished Professor of Modern British History and Director of the Hall Center for the Humanities at the University of Kansas. He received his Ph.D. from Warwick in 1975, his M.A. from Oxford University in 1978, and his B.A. from Warwick in 1969. His interests include Modern Britain, circa 1750 to the present; law and justice in Victorian and Twentieth-Century Britain; and the social and cultural impact of industrialization.

The focus of his research has been the origins, principles, and administration of the English system of criminal justice, from the early Victorian era through the twentieth century. He spent a year at the Institute of Criminology in Cambridge, under the direction of Sir Leon Radzinowicz, as preface to doctoral work at the Centre for the Study of Social History, Warwick, under the supervision of social historian, E.P. Thompson. At the Centre, he edited a collection of essays entitled Policing and Punishment in Nineteenth Century Britain (1981). As a research officer at the Centre for Criminological Research in Oxford, he worked on what would become volume five of Radzinowicz’s History, which dealt with penal policy and practice between 1830 and 1914. As a research fellow of Worcester College, Oxford, he received research funding to examine the history of modern criminal policy. The resulting study, published as Delinquency and Citizenship: Reclaiming the Young Offender (Oxford, 1987), dealt with the formation and implementation of policy for young offenders between the important legislative milestones of 1914 and 1948.

For the next few years (following a year as a visiting professor at the University of Rochester, New York), he taught in the Department of Economic and Social History at Hull University in East Yorkshire. He received funding to examine some 750 cases of suicide in Kingston-upon-Hull between 1937 and 1900, to provide the most detailed account yet of the workings of the Victorian coroners’ court, and to seek the causes of suicide in the impact of the different stages of the life cycle. This inquiry eventually became ‘This Rash Act’: Suicide Across the Life-Cycle in the Victorian City (Stanford, 1998). In the past years, he has turned to a book-length assessment of the principles and patterns of punishment (including the death penalty) in twentieth-century Britain. The main theme that will run through “The Rise and Demise of Rehabilitation: Punishment, Culture and Society in Modern Britain” is that historians and criminologists have misunderstood the guiding principles of modern punishment, and have exaggerated the dominance of the rehabilitative paradigm. An evaluation of the years 1895 to 1920, which appeared in the Journal of British Studies (July 1997), and which won the Love Prize of the North American Conference on British Studies for best article in 1997 by a North American scholar, will form the opening section of this book. This project has been funded by research grants from the National Science Foundation, the American Philosophical Society, and the NEH. Oxford will publish the book in its Clarendon Criminology Series.